What a year we have had!!!  The pros were definitely getting his barking at garbage trucks under control with the help of a trainer, a clicker, treats and my awesome clicker/treat timing.  Tuesday morning walks are so much more pleasant now.  Also I finally got a portrait of Chopper done - something I have wanted since forever.  It was a birthday present from my parents and I LOVE it.  The artist was great to deal with and really captured his spirit.

﻿
But his health issues this year were definitely a bit of a wake up a call.  For months it was unclear what was wrong with him.  After four months on steroids and in and out of the vet's office every other week, we finally got a biopsy and an answer that it was Autoimmune Skin Disease which is now under control.  Before that the vets were throwing around terms like lupus, pre-cancerous, cancer, organ failure, and who knows what else - most of it was a bit too much for me and I just focused on getting him better.


He's been on new medicine for almost three months now and it's been two months since he had a flare up so I am really hoping the worst is behind us.  We have a check up this weekend.

In the past I've done up some pretty fancy dog parties for Chopper but I think today I will bake him a little cake and have his best buddy Mumble over and just take it easy and enjoy the fact that we made it through this year.


﻿
And because it is his birthday I let him lay on the couch for a few minutes this morning.  ﻿ 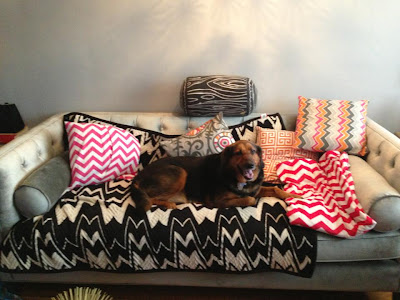 Chopper's 7th birthday is next month and I have not started planning yet!!  I need to pick a theme and get decorations.  We have had a rough few months but he is looking good and his new medicine seems to be taking care of his autoimmune skin disorder - his eye is all healed up at least.  He has a check up in a few weeks so we'll see what the vet says then.

In the mean time we are enjoying the fact that it stays light out longer which means longer evening walks.  And more photo opportunities.

Never over the last six years would I imagine that someone would say that about Chopper.  Chopper who came to me six years ago and tried to chase runners, every dog, barked at every truck while on a walk.  Chopper who still will bark at imaginary threats outside when we are in the house.  And Chopper who until six months ago hated garbage trucks so much that garbage day was an anxiety inducing event at our house.  But now Chopper is one of the best walkers in our neighborhood. He doesn't pull on the leash, not even to chase a squirrel.  He ignores (most) crazy dogs that are barking at him.  He sniffs politely.  And thanks to a few sessions with a trainer and a clicker, and lots of practice on my part, garbage day is no longer the low point of my week.

But today while we were talking with a neighbor - whose two year old lab can pull her across streets and who was going this way and that while Chopper just stood next to me patiently said to me "He's so mellow," I was shocked.  After I picked my jaw up off the ground and told her he was a "faker," I went on to explain all of the non-mellow things he did.  As we walked away I thought - well actually he is pretty mellow compared to how he was and maybe I should give him, and me for that matter,  some credit.  I put in the hours of training this dog, displayed patience I reserve for no one else in my life, and gave him a million and one second chances. I drove him in LA traffic to training sessions for agility, obedience, sniffing, herding - you name it he did it - all in an effort to forge a human/dog bond that would get him to listen and trust me. I read a stack of books about dog behavior.  I took him to a vet behaviorist and I implemented her plan. So the next time someone pays us a complement, instead of calling him a "faker,"  I will say "thank you, it was a lot of work."

I need to learn to take a complement about Chopper.  This dog who is actually pretty mellow most of the time (except when he's not, as a friend pointed out).
Posted by Mandy at 11:41 AM 1 comment:

So since November we have been dealing with a recurring eye rash around Chopper's eye, which has been pretty time consuming and expensive.  After FOUR months, a skin scrape and a biopsy (and stitches) he finally got a diagnosis of Autoimmune Skin Disease.  Today we went to the vet and the stitches came out (without any sedatives!) and he is starting on a new medicine, cyclosporine that will hopefully help keep the disease from attacking his skin (and not be harmful long term the way steroids might have been). He's really been a trooper over the last few weeks (he's had a cone on 24 hours a day since February 26th until we took it off at the vet a few hours ago).

Even with all the scabbing and itchiness he has had the last few months not much prepared me for picking up the dog from the vet after the scrape and biopsy - the skin around his eye was pretty bloody and gross and the friend I brought along for moral support (who actually bought me Chopper as a birthday present almost six years ago) started crying when she saw him so then he started whining.  So I had to hold it together for everyone.

This disease is apparently rare in dogs and getting the diagnosis was a long process.  At first they didn't want to knock him out for the biopsy so we were on antibiotics and steroids for months.  Then we though it could be a type of localized mange which would have shown up on the scrape.  Finally the lab results came back with the diagnosis of Autoimmune Skin Disease.

Some this sounds like it could be pretty serious but he is good health otherwise so I'm trying not to worry and to look at the positives: 1) While it is a little costly, I can afford the medicine to keep him healthy; 2) He doesn't have to wear that cone anymore (he ran into everything wearing that cone); 3) In the process we ended up switching vets for a variety of reasons and he seems a little more cooperative at this office than the last; and 4) He doesnt' need to wear the cone anymore (I really hated that cone).

Since the day after Halloween Chopper has been fighting a nasty infection of some sort. The morning after I took his picture in his Dopey costume he woke up looking like Rocky Balboa with a big swollen crusty nasty eye.  We of course went the vet immediately but it wasn't our regular vet and he prescribe some antibiotics and sent us home.  A few weeks later he got his teeth cleaned and got knocked out and the vet was supposed to scrape his eye but since it was almost gone they didn't.  Then he got boarded for Thanksgiving and when I picked him up it was back.  Sheesh.

I called the vet and we got more meds and he was doing pretty good.  Then Christmas and the poor old boy got boarded again.  From what I can tell it wasn't quite gone yet and he picked at it and made it worse.


I tried a cone for a few days to keep him away from it but it wasn't enough. So back to the vet we went. The doctor put him on more steroids and antibiotics and said to come back in a week.  We went back and it was better but the vet did a heart worm test (negative) and put him on a new flea medicine that also blocks mites.  At this point they would have done a scrape of his eye if he didn't think vets were devils in white coats.  There was a lot of fuss about how they should have done it when he had his teeth cleaned.  The vet said to come back in two weeks.

By the time of our next appointment he was looking pretty good to me but the vet was still worried and said that it could be an auto immune disorder which could be pre-cancerous and we had to take him off the steroids to see if it came back. And come back in two weeks. And another two weeks of antibiotics  Well that was not a fun car ride home (Chopper barking and me hysterical on the phone.)

So today we went in for our another visit.  He looked fine to me but he had looked ok to me the last time as well.  The vet gave us the all clear today!  But still no definitive answer on what was the matter, which sucks.  A few more doses of antibiotics left to go and I will be happy to not be spending Thursday afternoons at the vet anymore. (Once I got home I realized he needs vaccines next month so we get to go through this all again.)

So after 13 weeks, 5 vet appointments, 8 weeks of antibiotics, 6 weeks of steroids, and 5 days with a cone, his 1 nasty eye infection is (hopefully) gone.  On the upside I can use the cone to make him a martini glass for Halloween next year.

Apparently I did not publish this on Halloween - oops!

Once again Chopper and I were in matching costumes this year! 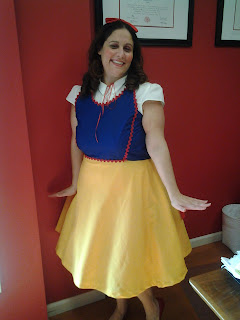 I've always loved Snow White so this year I finally dressed up as the princess for Halloween.  I made my costume and Chopper's (it took all weekend as my sewing abilities are very limited).

Hope everyone had a Happy Halloween!
Posted by Mandy at 1:31 PM No comments: 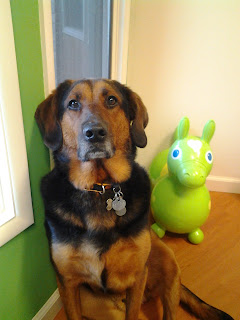 I had to work this past weekend and since the office was (mostly) deserted I brought Chopper along with me.  At home Chopper is content to lay down, have a bone, take a nap.  But at the office he wanted to hunt - he tracked down every stray crumb anyone had left behind or stash of snacks.  After two days he had found everything and he was bored.  So he sat and stared at me until I stopped working and took him home.
Posted by Mandy at 11:13 AM No comments: 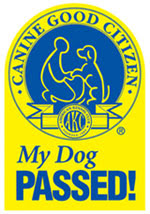